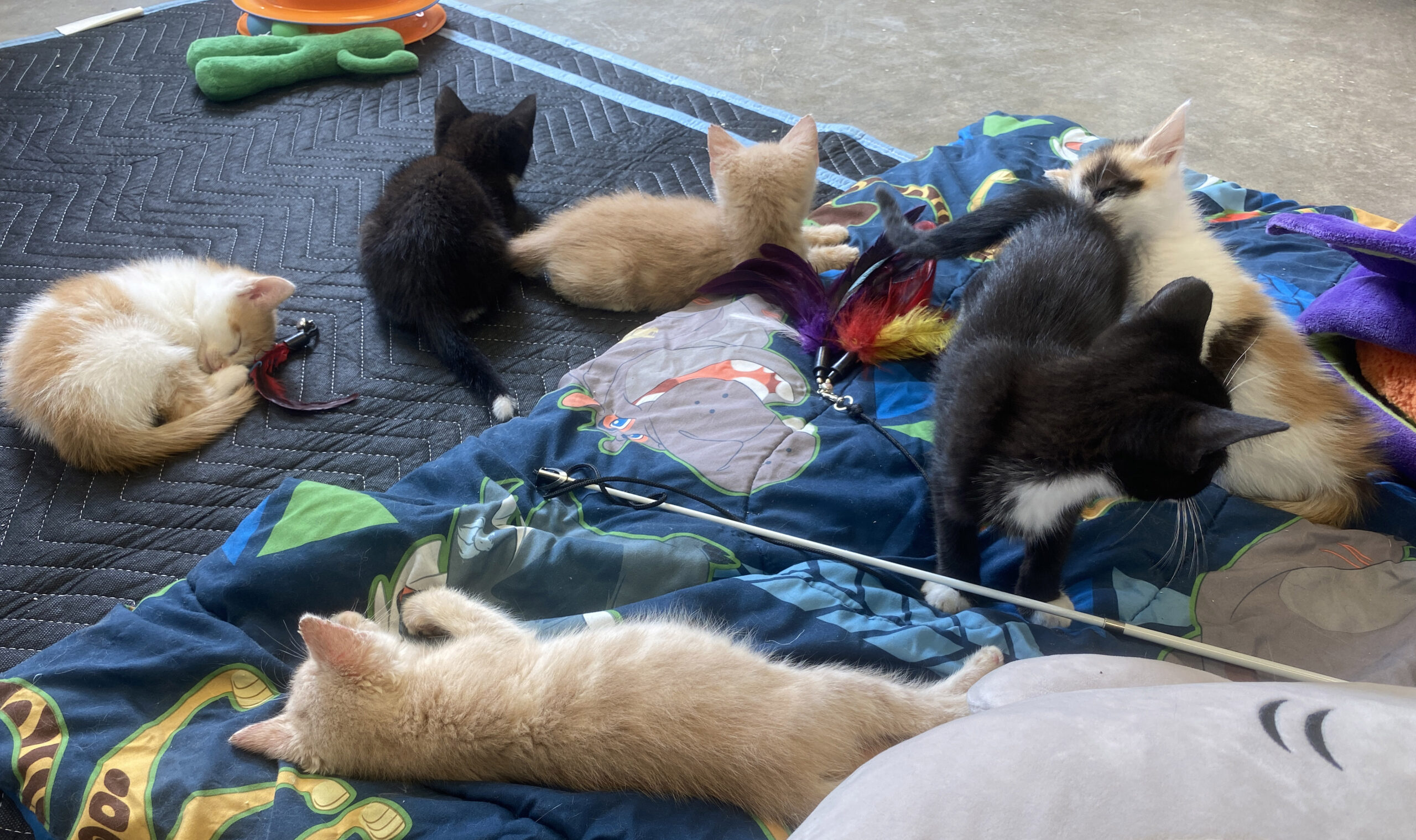 I have always been a cat person. Throughout middle school and high school, I volunteered and eventually got paid to work at the local animal hospital, where I was known to be able to calm the most frightened cats. Bucko and I have always had a cat throughout our 46 years together, but only one at a time, all calico/torties. Both Bandita and Masala lived to be around 18 years old, and our current cat Dumela is only 10 years old with hopefully another eight.

Bucko is adamant about being a one-cat household, but that’s not enough love for the cats in my life. Now that I have discovered volunteer opportunities at the Nassau Humane Society in Fernandina Beach, I have found fulfillment. My voluntary work consists in “socializing” the cats of the establishment. In other words, I have carte blanche to visit the cats and kittens, play with them, groom them, whatever, whenever the center is open. Wow, how come I didn’t find out sooner!

I’ve only been to the facility three times in my new role so far, but that’s all in the first week and I’m already getting to know some of the feline residents and some of the kind humans who make this possible. Most older cats live free in the “cattery”, two large rooms, an air-conditioned indoor room and a large outdoor area protected by a mosquito net. Cats are free to roam between rooms and there are platforms, chairs, boxes, tunnels, litter boxes and water bowls placed throughout the area. Toys of all kinds litter the floor, cat brushes are handy, and cats are given a variety of different brands of cat food and treats to suit their individual tastes. Some chairs are also good for visitors, and if you sit on one too long, you might end up with a cat in your lap, which isn’t a bad thing for me at least.

The cattery’s king cat is Tank, who has been rescued almost daily by longtime volunteers Cindi and Roy Carter, who spent weeks trying to befriend him when he was in the wild. and finally succeeded. Tank has been at the center for so long and has become such a friend of staff and volunteers that the Nassau Humane Society has adopted him as their own, to live out his life in this luxurious setting with people who adore him. Ferdi, another resident of the cattery, could also stay there for a long time. He is blind in one eye, which makes him jump easily when approached unexpectedly, but he also has the somewhat annoying trait of attacking people’s legs. But only to attract more attention. Once someone starts playing with it, swinging a feather on a string or something, it’s ready. This is what our volunteers are for.

Other cats are adopted quickly. During the week I visited, two adult cats were adopted, Millie and Marcus. According to Alec Rowe, the adoption manager, Marcus only lived at the Nassau Humane Society for a week while he was examined by animal care staff. When he was deemed ready to join the cattery cats, he only lasted 40 minutes there before being adopted.

Other adult cats that cannot associate with others for various reasons are housed in individual extra-large cages (the “condos”). Stephanie Miller, executive director of the Humane Society, also shares her office with a cat or two. She recently housed the elderly Tiger King there in his final days, before dying of age-related issues last week. Tiger had been a long-time resident of the facility, roaming the offices and hallways freely, the “sheriff” of the place, they said. His passing was a sad occasion, but it was lucky for Gremlin and Little Lee, a bonded adult couple, who moved from a condo to his office until they won someone’s heart. other.

And don’t get me started on the kitten room – cuteness overload! About a dozen little kittens are housed in cages here from time to time, but most of the time they roam freely around the room to entertain adoring visitors and potential adopters. Like the main cattery, this room is filled with cat toys and soft areas to sit. Unlike older cats, these little felines love to play and the room is usually filled with happy laughter from those watching their antics. There are few things more enjoyable for me than sitting on a pillow with baby cats in my lap and playing in front of me. Now the number of kittens is dwindling as they too are adopted. And this is a good thing.

And maybe during your visit, you will see me playing with the cats. I can’t stay away!!!!

Pat Foster-Turley, Ph.D., is a zoologist on Amelia Island. It welcomes your questions and observations on nature. [email protected]

‘Giddy Up & Give Back’ Benefits Hospice