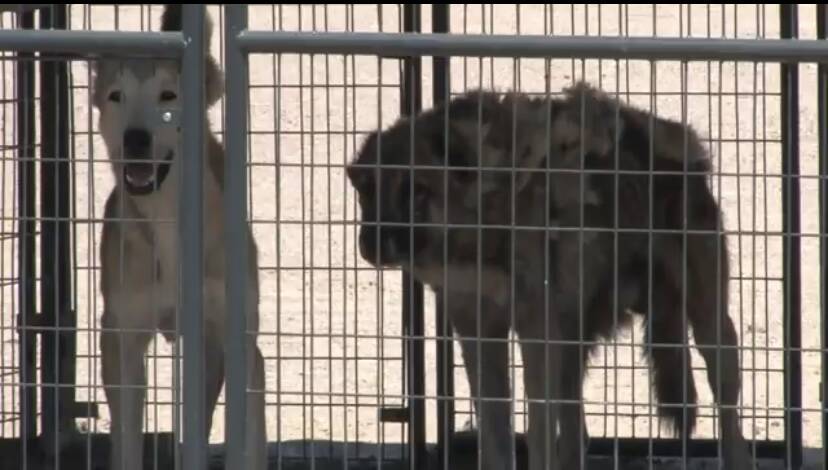 Officials: All dogs seized in the Amargosa Valley raid are safe at a county shelter

Nye County officials said Wednesday they moved all dogs seized from a kennel in the Amargosa Valley and another site in Pahrump last week to the county’s new shelter. Many dogs are said to be in “despicable” condition and are receiving medical attention.

“We obviously have a lot of work to do. We take great care of these animals,” Nye County Sheriff’s Capt. David Boruchowitz said in a YouTube video posted Wednesday night.

ASPCA animal rescuers, animal control officers, county inmates and a number of volunteers worked this week to care for the dogs and get them to shelter as temperatures reached 100 degrees, Boruchowitz said.

More donated kennels and supplies continue to arrive, which will help the rescue effort, he added.

“It has been long days. Our staff and inmates are very tired,” Boruchowitz said. “But obviously the care of these dogs is what’s important to us.”

On August 22, Nye County authorities confiscated 281 dogs from a Farm Road kennel in the Amargosa Valley and another site in Pahrump owned and operated by Oskana Higgins and Vasili Platunov. The couple have been charged with at least 34 counts of animal cruelty. Additional criminal charges could be pending, a prosecutor handling the case said Monday, after dozens of dead puppies were also recovered from freezers on their property.

A judge is giving the couple two weeks to respond to the criminal complaint against them.

A lawyer for Platunov told KPVM-TV on Monday that Nye County animal control officers were supposed to assist and supervise the couple in moving several dogs during the final months of their operations, following complaints from neighbors about the smell and noise of their operations.

Meanwhile, many dogs have reportedly been euthanized and some have been voluntarily turned over to animal rescue groups, according to information from the news station.

But Higgins and Platunov were not arrested until August 22, shortly after animal control officers and law enforcement officials raided their Farm Road kennel in the Amargosa Valley. and a site in Pahrump and seized hundreds of dogs believed to be in poor condition.

“If animal control is there to oversee this movement and operation, why haven’t they noticed anything?” Tom Gibson, Platunov’s attorney told KPVM on Monday. “The county also has a lot of explaining to do – especially animal control and the sheriff’s (office).”

The Nye County Sheriff’s Office and Tails of Nye County Inc. — a nonprofit animal rescue group in partnership with the local shelter — organized a GoFundMe to help the dogs. As of Thursday, he had raised over $27,000 to reach his goal of $75,000. The money raised will go to kennels, food and supplies for the dogs.