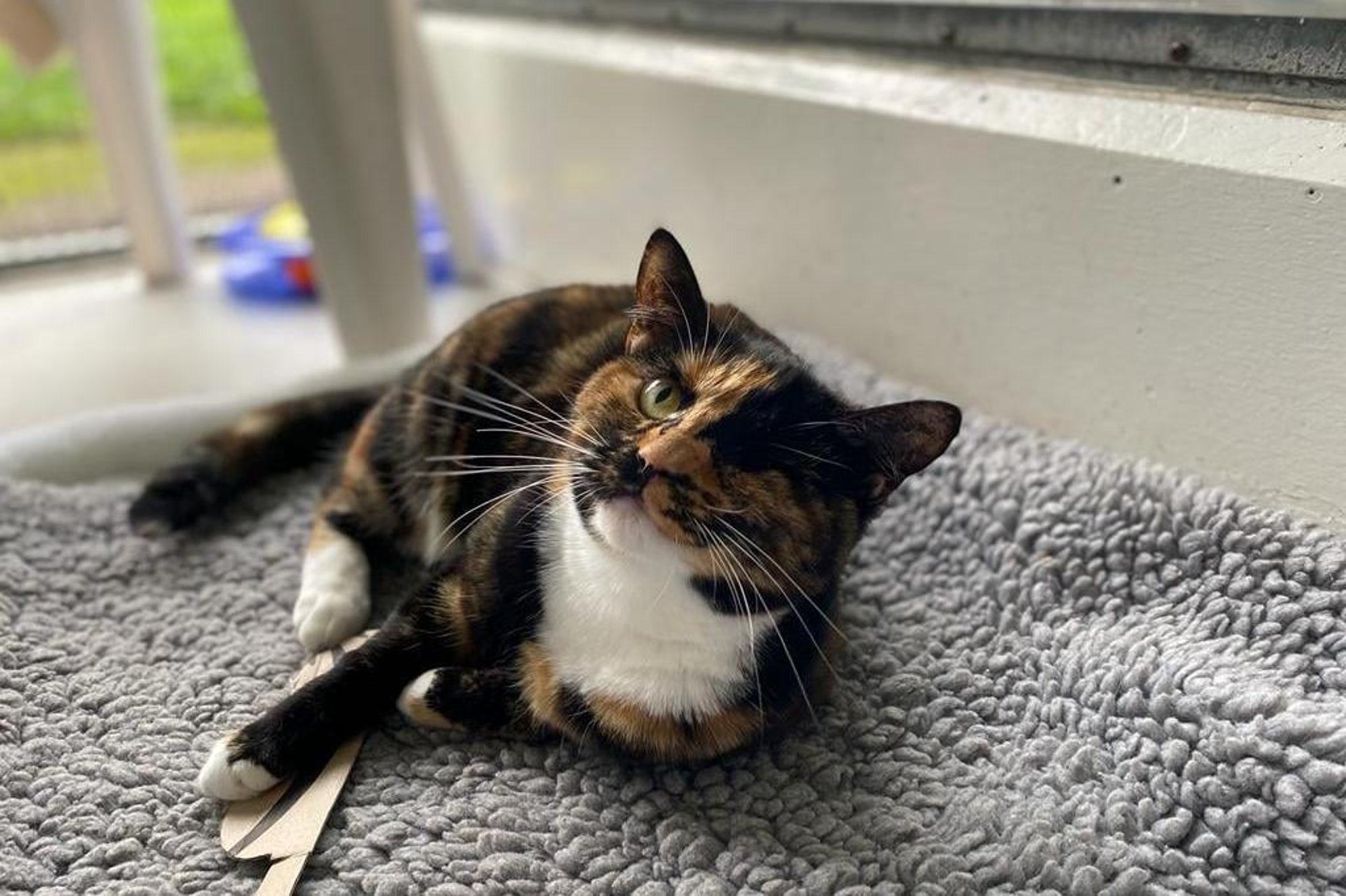 Trudie at ease in her new home

A cat who miraculously survived catastrophic injuries after being run over by a bus in Luton has got back on her feet to finally find her purring home.

The dedicated staff and volunteers at RSPCA’s Southridge Animal Center in Hertfordshire heard what had happened and were desperate to find the cat. They worked with Cat Welfare Luton to find her; put up posters, post on social media, contact local vets and drop flyers in the area.

Dennis and Shirley with their new companion

Sixteen days later, she was spotted, caught, and rushed to a local vet for life-saving treatment to put her shattered jaw back in place and remove her damaged eye. Her injuries had prevented her from eating, so she was hungry and very weak.

Southridge deputy manager Mona Jorgensen said: â€œIt’s a miracle she survived these horrific injuries, especially since they left her unable to eat. She showed that she was a real fighter.

â€œAfter her operation, she was tube fed for the first week, then when she got to our cattery, we slowly weaned her off normal food and helped her start walking again.â€

Her name was Trudie, in honor of St. Gertrude, the patron saint of cats, and the staff spent six months caring for her to regain her full health before starting to search for a new home for her.

Trudie during treatment to save his life

Mona added, â€œWe all spent so much time with Trudie and she had a special place in all of our hearts. After everything we had been through, we knew we had to find the most amazing home for her.

Dennis Hooper, of South Mimms, heard about Trudie through his daughter who was desperate to provide a home for the local celebrity.

Dennis and his partner Shirley Carter felt they could give the pretty tortoiseshell a home forever. He said: â€œMy daughter and her fiance were not suitable for Trudie because they have another cat, but we knew we could give her a nice quiet home.

“We’re big animal lovers, especially cats, and I knew I would choose an animal that had gone through the worst times so that I could show them a good life.”

The couple got Trudie back last week and she is settling in well in her new home.

Dennis said, â€œShe’s smashing; she loves stories and is really darling. She is progressing really well. She loves spending time in the sunny porch; she has her own chair, two armchairs and a sofa to choose from so that she can move around to take a nap in different places!

â€œShe loves watching the birds in the birdbath and we have a lovely big garden so once she’s ready I’m sure she’ll enjoy exploring the outdoors.

â€œWe didn’t realize how much of a star she was; she even asked Americans to donate to help her and ask for updates. She had been with Southridge for a long time and the girls were almost in tears when we went to pick her up, but we told them to come visit her whenever they want!

To help the RSPCA continue to save, rehabilitate and relocate animals in desperate need of care, like Trudie, visit the website or call the donation line on 0300 123 8181.