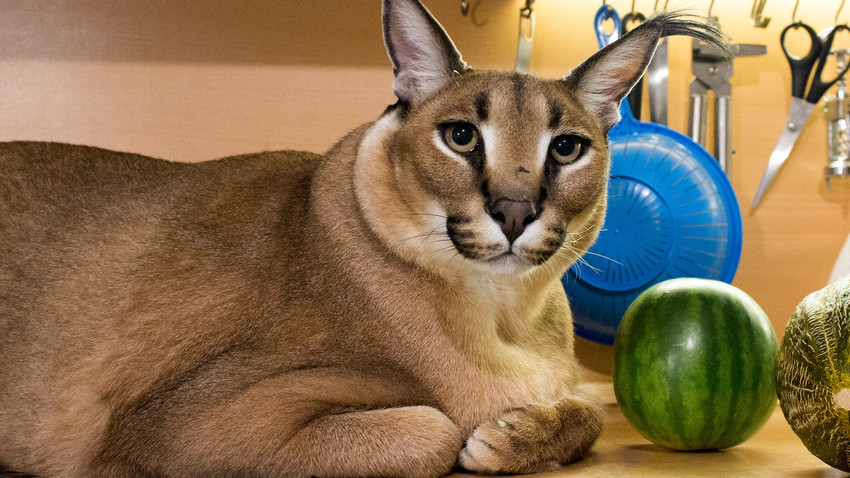 Green eyes, a big nose and big bushy ears – social media users have used a photo of a cat named “Big Floppa” to create memes, doctored images, T-shirts, statuettes and even applications for mobile phones. In fact, Floppa lives in Russia and she’s not really a cat.

In April 2018, Andrei Bondarev, a videographer from Moscow, posted a photo of his “pet” enjoying his meal on his Instagram account – a giant short-haired cat with a large elongated nose, bright green eyes. and extremely long bushy ears.

â€œTo become a big cat, you have to eat a lot! was the legend that started the cat and her fellow cats, Matvei and Zhora, as bloggers. In 2020, the chat became popular on social media and websites, such as Reddit, as â€œBig Floppaâ€ or â€œKot Shlyopaâ€. He gets his nicknames from his ears.

In fact, his name is ‘Gosha’ and he is a caracal, a wild cat that looks like a lynx. Caracals are from Africa, Asia and India, but Gosha was born on December 21, 2017, in a cattery specializing in wild cats in Ukraine.

Several months later, in April 2018, he moved to Moscow after being adopted by the Bondarev family – Andrei and his wife Yelena.

“Lena [short for Yelena] saw this animal on the internet and showed it to me so we decided to acquire a wild cat. Why not? At first, the idea was not quite serious and looked like a dream to be realized one day. But for a whole year we were preparing for it and consulting with experts and we got so used to the idea that we couldn’t give it up, â€recalls Andrei of their decision to get a caracal.

It took Georgy [full form of Goshaâ€™s name] and its pet delivery couriers over 24 hours in a minibus to Moscow. According to Yelena, for the first few days he was afraid to walk around the apartment; he hissed and hid, but did not refuse to eat. Gosha was “mentored” by Matvei – another cat the Bondarevs have taken in from an animal shelter, who is already over 12 years old.

“Zhora [cat number three, 4Â½ years old] was very offended at us for welcoming someone else and for the first two weeks he ignored Gosha and us. Now he’s Gosha’s best friend, â€Yelena said.

From a young age, Gosha hunted toys and ran with other cats. The only difficulty was to train Gosha to use the litter; but, according to Yelena, these are “routine feline problems”.

â€œGosha dominates and sees me exclusively as her human being and no one else’s. He has a fairly canine nature, he is very dedicated and does not like to be alone. He’s very careful with people he doesn’t know, â€Yelena says, describing the character of the caracal.

Andrei says Georgy’s behavior is often rude – when he’s got nothing else to do, he shreds pieces of cardboard that Andrei and Yelena buy especially for him, but that doesn’t stop him from ruining the house as well. wallpaper and furniture.

â€œIn places he scratched the walls to the concrete. The first year I used to fix the plaster and patch up the wallpaper, then I gave up. And the TV is scratched – Gosha jumped on it when he saw birds on Animal Planet, â€says Andrei.

Gosha became popular on the internet in early 2020 thanks to a photo, in which he is lying on a windowsill with Zhora.

This photo kicked off a series of demotivating posters, memes, and forged photographs – initially the photos were shared in memes communities on Instagram, then spread to Twitter and Reddit.

â€œOne of my husband’s internet friends, who also owns a caracal, told us about Gosha’s popularity on the internet. We thought, â€œWow, that’s cool! And continued to post pictures of him. Only, I really don’t like when Gosha is used for memes about controversial ‘topical’ political topics, or memes featuring Nazism, racism, homophobia or other offensive content, it’s terrible, â€Yelena said.

In 2020, Gosha’s supporters asked the Bondarev family for permission to use images of him for merchandise, and Big Floppa cups, figurines, and even cubes went on sale.

Also in the spring of 2021, an application dedicated to Big Floppa appeared on the Google Play App Store. The game consists of a photo of Gosha [known as Gregory in English], which changes position when clicked. So far, the game has received exclusively positive feedback.

â€œIt’s a cool game, the content is very interesting and there are even a few howlers. When I clicked on Shlyopa (Floppa) he growled so much and scared me so much. All in all, it’s got everything here and you don’t even have to add anything extra. writing a user in the comments about the game.

â€œTo show their gratitude, some supporters send us donations, part of which goes to help other cats. But the donations are not enough to maintain Gosha, which costs 20 to 25,000 rubles (270 to 340 dollars) per month and which covers only food and the filling of her litter, â€says Yelena.

In addition, a feral cat specialist examines and vaccinates Gosha twice a year. Other than that, according to the Bondarev family, he is no different from an ordinary cat.

â€œThe only difference is its size, so you have to be more careful and be more careful. The accidental injuries you get when, for example, playing with it are much more serious than those caused by small cats. Of course, the degree of “destruction” of the house also increases in proportion to the size of the cat. For the rest, a cat is also a cat in Africa, â€concludes Yelena.

If you use all or part of the content from Russia Beyond, always provide an active hyperlink to the original content.

Food Review: the Tapas menu at Pablo’s Bistro is suitable for all tastes