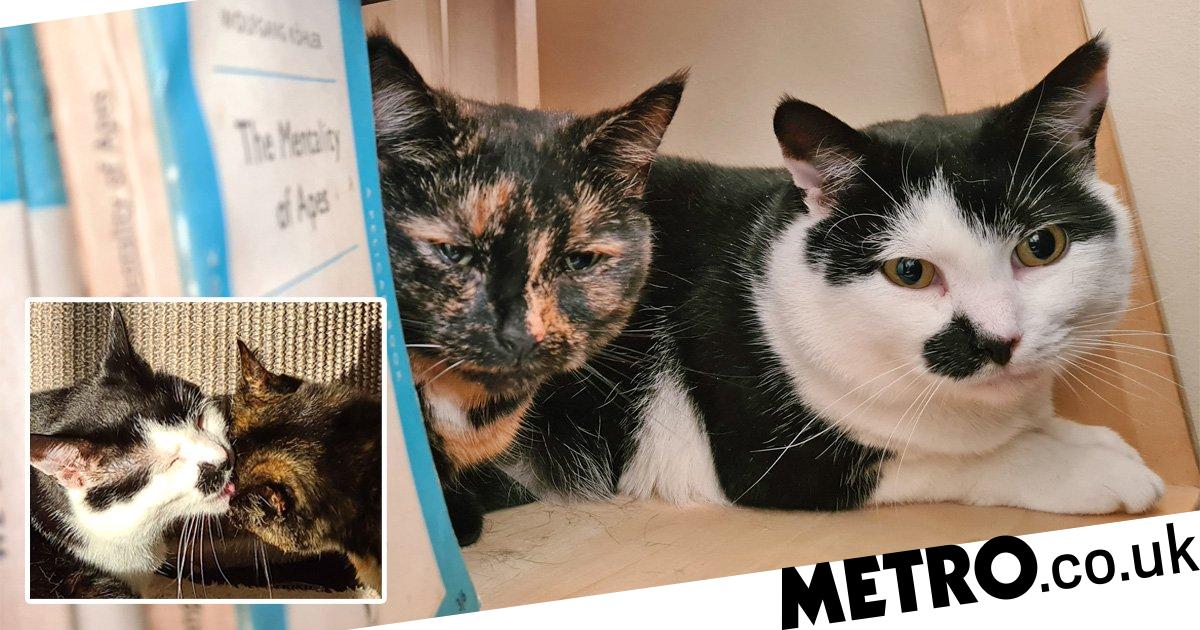 Luke and Leia, two anxious cats, need a home. Can you help ?

May the paws be with them.

Two anxious moggies from RSPCA Stapeley Grange are hoping you will give them a forever home.

Luke (black and white) and Leia (black and brown) have come on leaps and bounds after spending time with foster families following a stay at the Central Cheshire cattery.

They were rescued after they were found huddled under the floor after their former owner died at a property.

It was a harrowing experience for the two felines, aged around two to three, and they were very anxious when they arrived at the RSPCA centre.

The duo, named after the star wars characters Luke Skywalker and Princess Leia, feared being approached and preferred to stay on the other side of their compound when staff were around.

The cattery felt that placing the couple in foster care would get them used to living in a house and help build people’s confidence.

In their new environment, they have learned to socialize with their caregiver and enjoy playing with their toys and cardboard scratching boxes and scratching posts.

Their progress has been such that they are now ready to make their next move to a permanent forever home.

Their progress demonstrates the important role foster families play in helping the RSPCA rehome the animals.

The charity urgently needs more carers to help free up places at its animal centers as shocking new statistics reveal that 700 rescued animals are waiting for a place.

The charity is currently spending £26,000 a week in private boarding costs for the temporary care of hundreds of rescued animals as its 59 shelters are ‘full to bursting’.

In response, the RSPCA has launched an urgent new campaign to recruit more foster families – who temporarily care for animals in their own homes, while being supported by the RSPCA – to help ease the pressure.

Anyone interested in becoming a host family can find more information on the RSPCA’s online volunteer portal.

The drive to recruit new foster homes is part of the charity’s Adoptober campaign, launched this month to raise awareness of some of the animals it cares for who are in desperate need of homes forever and a chance for a new life.

Lee Stewart, RSPCA Stapeley Grange Cattery and Wildlife Center Manager, said: ‘Foster placement is a great way to give our cats the chance to settle into a more domestic environment. .

“As our staff and volunteers can only spend a limited amount of time with each cat within the confines of their wards, we thought we could best help Luke and Leia by placing them in foster care.

“They were clearly comfortable with each other’s company, but less so with us, especially when they needed an examination or treatment.

“They sometimes took treats from our hands, but they didn’t know how to interact with people – when they saw a big hand coming towards them, they backed off.

“Now they both become more interactive. Although still wary, they have learned to greet people with nods and they like to have their noses rubbed.

“They are still quite nervous about sudden movements, so we think they are best suited to a quiet household with no young children or other pets.

“It will take time for them to learn to trust people, but they have made huge progress since joining Stapeley Grange.”

Their current foster family, who live in the Northwich area, said: ‘When Luke and Leia arrived at their foster home, they were extremely nervous and quickly found hidden holes to disappear into.

“Gradually they’ve been spending more time outdoors, but they still like knowing there’s the safe space of a bed or a coffee table to retreat to.

“They are not vocal cats, but sometimes the nice sound of a spontaneous purr is heard when they are together.

“They like to play together with a stick toy and sometimes an outstretched hand hidden under an envelope – they love trying to find out what’s underneath, especially when it’s crinkling and moving.”

If you think you can give these sweet little cats a home go to the Stapeley repatriation page.


Can’t give a pet a new home? There are other ways to help:

• Become a foster family for a sick animal recovering from surgery or a youngster who needs to learn how to behave in a home;
• Help the RSPCA continue to rescue, rehabilitate and relocate by donating online or calling the donation line on 0300 123 8181
• Sponsor a cat carrycot or dog kennel and help care for animals during their stay with the RSPCA
• Support the work of your local center or branch by volunteering or donating directly to them

To support the ongoing work of the RSPCA Stapeley Grange Cattery, during this extremely difficult time, you can donate on their JustGiving page.

AFTER : How You Talk to Your Cat Really Makes a Difference, Study Finds

AFTER : Missing cat reunited with owners after being presumed dead for six years