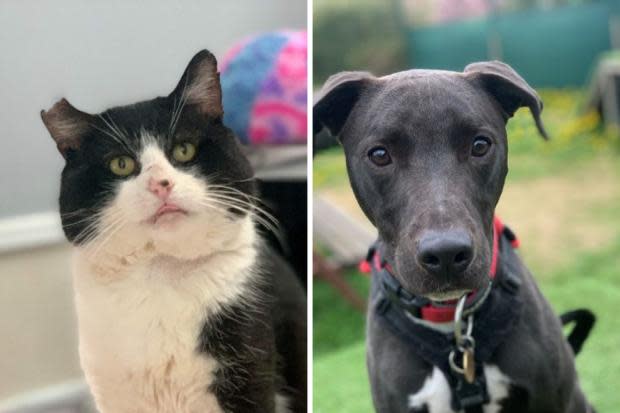 George and Zooks are looking for a house

This week we bring you this adorable furry pair.

The first is George, the cat.

Although he looks a bit rough around the edges, this guy is a really big softy.

Now at Oak Tree Animals’ Charity in Wetheral, George was discovered through their community team’s Trap Neuter Return (TNR) program which is why he is missing one of his ear tips.

A spokesperson said: “It was very clear to the vets who treated him that he was not feral, but it is likely that he has been living as a stray for some time.

“Since coming to our cattery he has made himself at home and settled in quickly. George enjoys his creature comforts and gentle restlessness, he will easily approach you for head bumps.

“George will continue to be assessed and his profile will be updated with any new information.

“His new home will need to be in a semi-rural or rural location as George is used to spending a lot of time outdoors, with plenty of space to explore.

“He would prefer a quieter home because although he is confident with people, certain louder noises startle him.

“George would rather be a single pet so he wouldn’t feel the need to fight over food or affection.”

Next, Zooks, the dog, and an adorable one-year-old x Patterdale lurcher.

The spokesperson added: “Zooks has a lot of energy so he will need a home that can provide him with what he needs.

“He can be a great candidate for someone doing park runs, running or canicross.

“This lovely boy will need adopters who will continue his training but the good news is that he is very lively and eager to learn.

“He’s responding well to our positive game-based training, so we’ll be looking for someone who likes to carry on.”

“Zooks is not used to being left alone and can bark very well if left alone.

“We’ll be looking for a home that maybe can take him to work, or maybe has extended family, who could help him with his day care until he finds out he doesn’t have to. there’s nothing to worry about being left alone.

“We are still evaluating Zooks but he may be able to live with another dog but not cats. Due to his exuberance we would only consider a home with older children.

“He loves his walks but should be safely leashed around livestock.”

For more information, email [email protected] with your name, address, phone number and some information about yourself.