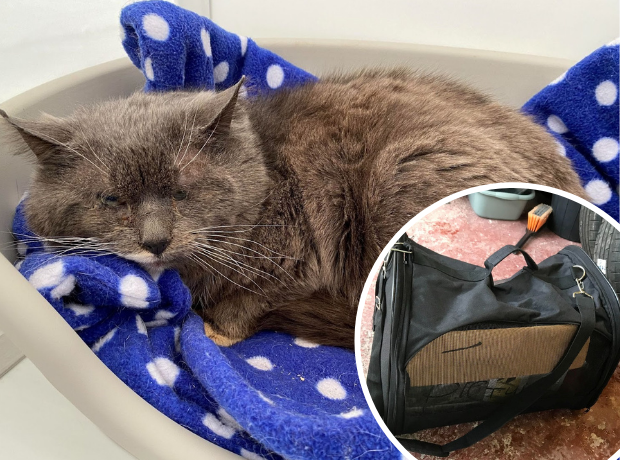 Cat thrown in a black bag next to the house

A cat was thrown into a tote and left at the side of a house.

The RSPCA is now seeking information on how the injured cat was left in a bag next to a house in Blackpool.

The semi-long haired cat was suffering from an eye infection when it was picked up by RSPCA inspector Will Lamping from Highfield Road on the South Bank.

After a visit to vets, he was taken to a cattery used by the Fylde branch of the RSPCA, where staff named him Belvedere.

Belvedere, who is around eight years old, was not microchipped and was lying in a box that had been placed inside a black tote bag.

He was found by the householder at noon on Wednesday February 16.

Insp Lamping said: ‘He was a bit dirty and had an eye infection which he has now had drops for. He will also be neutered.

“It was an unusual place because the bag was left at the side of the house.

“There was nothing on CCTV to see when it happened and although the caller thinks he was left that morning or that night, we don’t really know how long he was there. .

“But Belvedere was very happy to have a meal.”

Inspector Lamping says changing circumstances are often the cause of cats being abandoned, but he insists owners should always seek help and advice from charities such as the RSPCA.

He added: “We are going through a difficult time and some people may no longer be able to care for their cat and may not have the funds for veterinary treatment.

“We always told people that they have a responsibility towards the animal and that it is not acceptable to leave them in this kind of situation.

“In that case, we’d love to hear from anyone who has information about the cat or sightings of it before it’s dumped.”

A distinctive red fleece bearing the logo of a former Blackpool tourist attraction had been placed inside the bag next to the cat.

To help the RSPCA continue to rescue, rehabilitate and rehome animals in desperate need of care, please visit our website or call our donation line on 0300 123 8181.