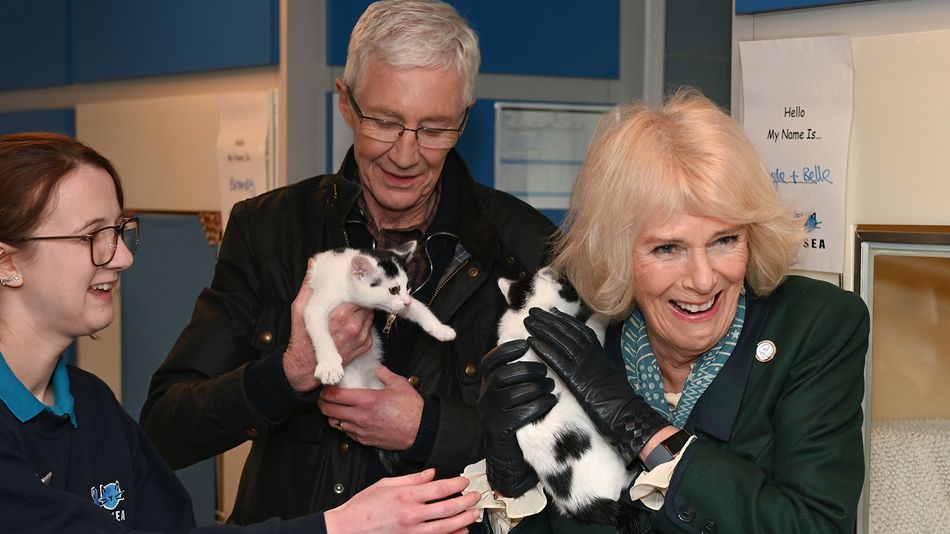 It was a battle royal today as the Duchess of Cornwall – and her rescue dog, Beth – took on TV star Paul O’Grady and his abandoned pup, Sausage, in the ultimate canine showdown.

The two pooches battled it out in a dog training game known as Temptation Alley in which contestants are encouraged to ignore dog treats and toys on either side and run straight for their owner on the other end .

The Duchess, 74, was at Battersea Dogs and Cats Home rural center in Brands Hatch, Kent, in her role as patron of the charity.

She rehomed two Jack Russell terriers through the organization, Beth and her pal Bluebell, who also attended but deemed too naughty to participate.

Mr O’Grady, a Battersea Ambassador, was filming his hit TV show For The Love Of Dogs, which Camilla and Beth will star in.

As she entered, Camilla was delighted to see “Bethy” waiting for her and made a big fuss of her. “What could go wrong,” she laughed, rolling her eyes.

Dog behavior manager Ali Taylor placed the dogs at one end of the room with a member of staff and told Camilla and Mr O’Grady to stand at the other end ready to call their dogs .

Mr. O’Grady interjected: “Mine doesn’t speak English!” She comes from Romania and has a Polish chip!

Camilla and Beth went first with the Duchess holding a squeaky yellow ball in her hand and encouraging Beth to run towards her.

With only a very slight detour at first to retrieve another ball, Beth made it to her mistress – albeit outside the fairway.

She got another chance and had to be dragged away from Camilla, barking in excitement as she ran towards her.

Crouching on the floor, Camilla made a big fuss of herself with Mr O’Grady, admitting: ‘She did well’.

Then it was Sausage’s turn. She was led to the back of the room but made it clear, despite the presenter’s frantic squeal of a toy pig, that she was going to head for the treats.

After sucking down a few morsels of food, she ran over to the photographers and seemed more eager to say hello.

Battersea Ambassador Mr O’Grady was filming his hit TV show For The Love Of Dogs, which Camilla and Beth will star in

Camilla and Beth duly received a small trophy for their win.

“She’s pretty good with people, but less good with other dogs,” Camilla confessed.

Battersea Brands Hatch, which opened in 1999, is a country retreat for dogs and cats suffering from stress or anxiety in bustling central London.

It is surrounded by 12 acres of fields and has been home to around 3,000 dogs and cats in the past five years alone.

Upon arrival, Camilla was greeted by a ‘dog honor guard’ and met some of the strays looking for homes.

She warmly welcomed her friend Mr. O’Grady with kisses and was introduced to Sausage. “She’s a bit of an escape artist, I hear,” Camilla said of the wire-haired dachshund.

Inside the cattery, she picked up Bell, a nine-week-old kitten who, along with her brother Jingle, is looking for a home. “Hello, you’re very nice,” she said.

Camilla showed the kitten to the camera but then had to wriggle free after the animal was grabbed trying to climb on her coat. “They have pretty strong claws! she exclaimed.

She was also lucky enough to spend time with an elderly West Highland white terrier who was brought to her Battersea by her owners as they had other dogs.

He is currently undergoing medical treatment so that he can be deemed fit and healthy before being relocated.

Speaking after the visit, Mr O’Grady praised the Duchess’ commitment to Battersea, saying: “I just love her.” She is great. What I find wonderful is that she also has two local dogs. She puts her money where her mouth is. She’s a fantastic ambassador for the charity. If Sausage and I were going to lose to anyone, it might as well be her!

Rescuers tear down rock wall in tow law to save cat